When I first started using castor oil packs years ago, it wasn’t for my autoimmune diseases – it was for infertility.

I had multiple miscarriages in the process of having my second child and when I started seeing a fertility acupuncturist, she mentioned that my cycles were all messed up and the miscarriages were a sign of some kind of blockage, either in blood flow, or otherwise, and castor oil packs would help.

At that point, we hadn’t seen a reproductive endocrinologist yet, but months later when we did – he actually confirmed what the acupuncturist said. I have a rare blood disorder that was contributing to the issue.

I’ll talk more in future posts about our infertility journey, but today, we are focusing on castor oil packs and the incredible relaxation and health benefits they provide.

Even though we are done growing our family, I have continued to use castor oil packs over the years to help with symptoms related to autoimmune diseases and am a big fan!

The Benefits of a Castor Oil Pack: 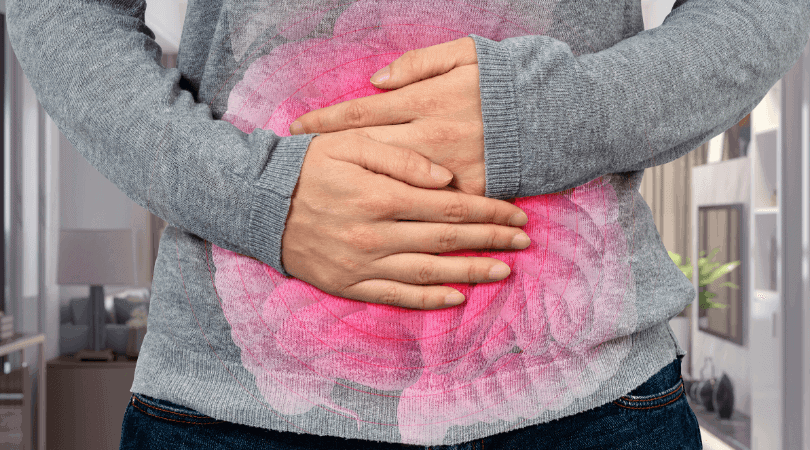 When I did my due diligence and researched the benefits of castor oil packs – I was super excited and totally game to try this ancient Chinese medicine technique.

Castor oil packs have been used in Ayurvedic medicine to promote healing, improve circulation and reduce inflammation for thousands of years. The use of applying castor oil topically can be traced back to medical textbooks in Egypt as early as 1550 B.C.

Unlike drinking castor oil, which can be unsafe an cause digestive upset, using castor oil topically is much safer and gentler, and packs a lot of benefits.

Castor oil works by stimulating your lymph and liver function by increasing your lymphocyte count, which allows the body to speed up the process of removing toxins from your tissues. Lymphatic congestion is a key factor in inflammation and disease. So, if you have an autoimmune disease or health issues, you are likely struggling with a sluggish lymphatic system where toxins are building up and making you sick.

Basically, it’s like a super cleanse for your body – and encourages your body to do a better job of what it should be doing already. But, if you’re sick or struggling with health issues, thats a big heads up that your body needs help improving these basic functions.

And, strangely, castor oil packs can have a subtle shrinking effect on the midsection, too. Not a bad deal.

If you’d like even more detail on the many benefits of castor oil packs, especially for women, check out this helpful post.

What You Need To Do a Castor Oil Pack:

Castor oil packs are a super easy, non-invasive and relaxing natural remedy. You only need a few things to enjoy the relaxation and many benefits of castor oil packs and I bet you have most of them! I’m linking to the products that I have, use and love. Affiliate links are used.

How To Do a Castor Oil Pack:

The steps are so simple. Once you get your kit together, you’ll see how easy it is and after experiencing the relaxation and inflammation reducing qualities, it’ll be something you’ll reach for again and again.

Castor oil packs can be put on different areas of the body, such as over the the thyroid, over the liver, over the general mid-section area, over a certain area that has been in chronic pain, etc.

The use of a heat pad on top just encourages the castor oil to deeply penetrate the skin and increase the benefits.

You’ll want to set up your area before you put the pack on, because once it is in place, you don’t want to move for awhile.

Here’s how to do it:

Remember that castor oil removes color from anything it touches, so cover your couch, change your clothes, take precautions so you don’t touch anything when it’s on your hands.

How Often Should You Use Castor Oil Packs:

I used them consistently over the course of a few cycles at first and saw incredible changes. These days, I use them when I start to feel a lot of digestive distress, start having painful periods again, or just have a lot of autoimmune disease inflammation.

Typically, for best results, use them every day for 30-60 days, skipping when you are on your period, for a particular ailment. Or, for maintenance, they can be used 1-2 times a week.

The great thing is that you can do what feels good for you. There aren’t really specific rules to this and because castor oil packs are so gentle and easy, you can decide. If you do start to feel any stomach upset, which is unlikely, you can skip a day between them and still see results.

But, a bit of housekeeping, I am not a doctor. I am a well-researched person who shares what I have learned in the hopes that it might encourage you to find what works for you. Please run any ideas by your trusted medical team if you’re being treated for any illness and/or stop immediately if you feel any discomfort in using castor oil packs. You’ll need to be your own advocate and take full responsibility for any results of using castor oil packs. I love them and am one of many people who have great results with them and I sincerely hope that is also the case for you, too.

Have you ever tried castor oil packs? What did you think?

There are so many other uses for castor oil, too, such as a natural way to grow super long eyelashes, so you may be reaching for that castor oil more often than you think!