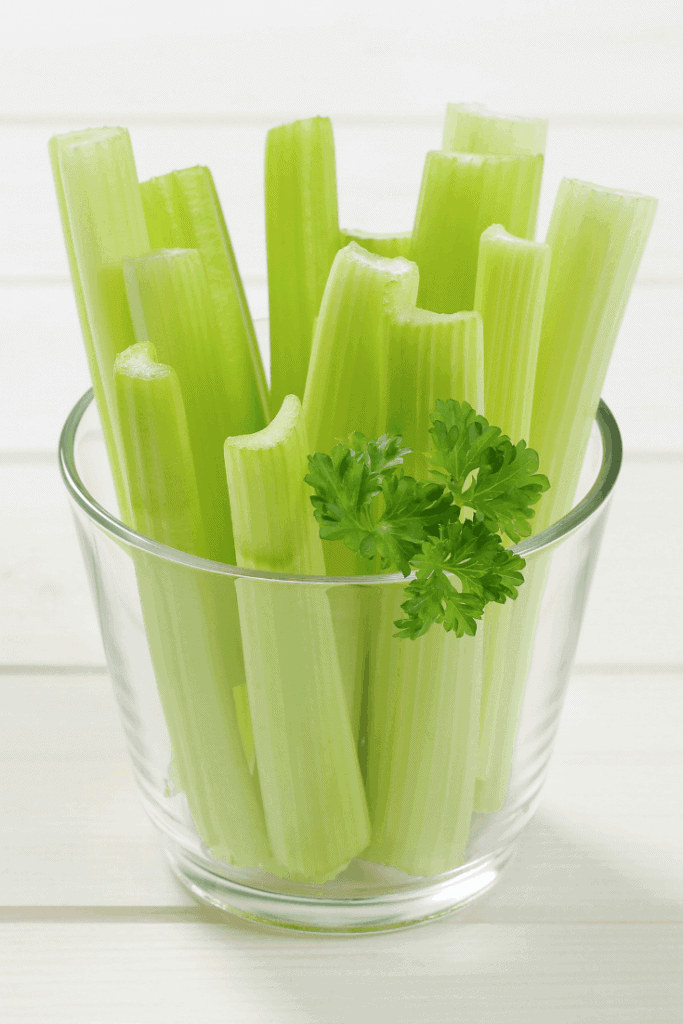 If you’re on social media, you’ve probably heard about the big celery juicing trend. Everyone from Kylie Jenner to big-time Instagram influencers are juicing and sharing about it.

And, if you’re anything like me, you thought – ah, it’s just another fad, like the keto diet.

Since I’m already taking supplements for inflammation, drinking lots of superfood smoothies, and sticking with my pilates regimen, I felt like unsure about adding something else right now.

But, after I continued to hear about the health benefits of celery juice, I dusted off my juicer and decided to give it a go.

I decided to commit to celery juicing for a period of time and track any changes in symptoms to see if it really worked. I wasn’t thrilled about drinking celery, but as Moira would say…

I figured 2 weeks was a good amount of time and bought some celery to get started.

Here’s the recipe I used:

Celery juice is super easy to make, especially if you have a juicer. I made this quick video to show you how I make it and the instructions are below in case the video doesn’t work for you:

How To Make Celery Juice:

One pack of celery will make around 16 ounces of celery juice.

According to the Medical Medium, the guy responsible for starting the celery juice movement, best results are seen when drinking celery juice first thing in the morning on an empty stomach and then waiting 30 minutes to eat.

Let’s find out what happened as I started drinking it. (Update: I’m still juicing years later. Read my updated post – 5 gut health benefits of celery juicing after you finish this one!) 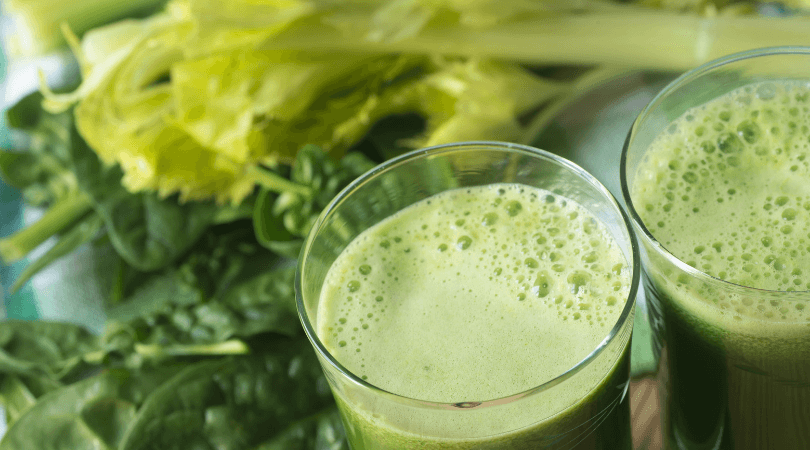 I followed his rules precisely and then took a big swig of my room temperature celery juice.

And, wow, celery juice is salty. I mean, really, really salty. It tastes like celery on steroids.

You get a whole lot of celery and saltiness in each gulp.

I would not describe the experience as pleasant. But, after drinking just a few ounces, I started feeling things in my body moving.

If you suffer from an autoimmune disease, you probably also deal with a very sluggish digestion process in general. This causes a long list of uncomfortable symptoms I won’t get into here.

Almost immediately I noticed celery juice was like a flushing system for the body and the liver.

This leads me to my first Do.

Do Drink Celery Juice on an Empty Stomach.

When I skipped this rule and drank it later in the day, I did not see as much improvement in digestive inflammation.

But, drink too much celery juice and you start to have another, rather embarrassing problem.

I would start with 2-4oz. a day and work your way up as your body can handle it.

You’re better off drinking 4oz. and seeing great results than chugging 16 ounces and spending all day in the bathroom. 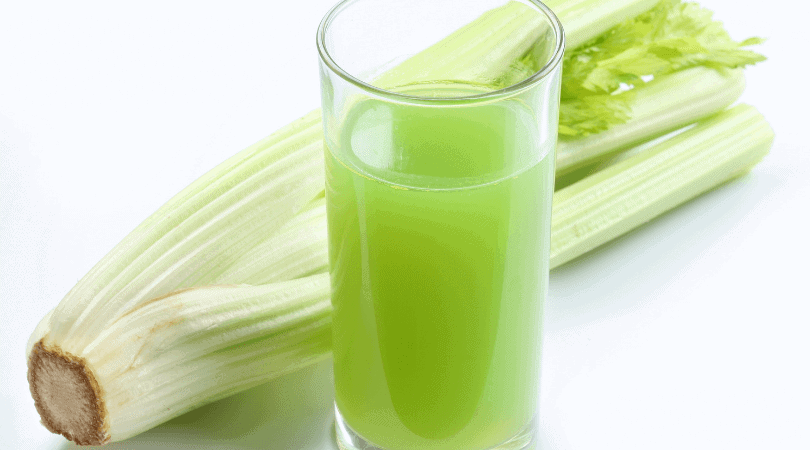 After drinking celery juice the first day, I refrigerated what was left and used that for the following mornings until it was gone. Celery juice stays good for a couple of days in the refrigerator, so you can make more than a day at a time.

Sure, Medical Medium says it’s better fresh and warm, but when you have small kids – you need to batch work to survive.

Day 7: A Week of Celery Juice

After drinking celery juice every day for a week straight, I noticed a few things.

First, I had adjusted to the taste and it wasn’t so horrible.

Second, the improvement in inflammation meant that I had more energy in the mornings and had more clarity of thought.

I found myself looking forward to drinking it and enjoying the benefits of feeling refreshed each morning.

I also found that I was drinking less coffee to clear a foggy head.

When you have an autoimmune disease, you are accustomed to some degree of constant symptoms, but I noticed with celery juice, I wasn’t needing as long in the morning to feel warmed up and ready to go.

Let’s skip ahead to the end of week 2. 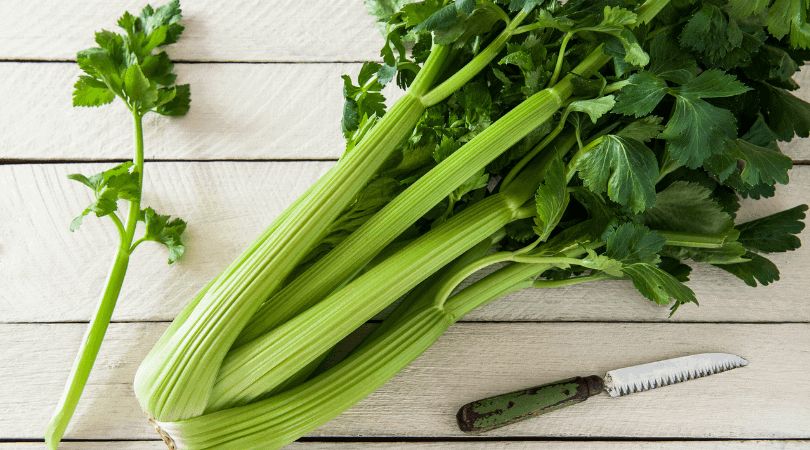 Here are the 4 main benefits I personally felt after drinking it.

I really felt reduced inflammation in my stomach and liver. Things were moving much more smoothly, bloating was down, and other positives were definitely noticed.

When you have inflammation in your stomach, there is just a general feeling of sluggishness and discomfort that plagues you 24/7. To have that improved frees up your energy and thoughts for more productive things during the day.

I wrote a whole new post on 5 remedies I do for stomach pain and inflammation, including celery juicing. Check it out here.

My brain felt more clear in the mornings than usual before coffee. I was able to get to work and write more efficiently than normal. The general brain fog that comes with being tired, with small kids, and 2 autoimmune diseases was definitely improved.

I felt less cravings for sweets and garbage. The saltiness in the juice eliminated the feeling of wanting something salty. I also needed less coffee, and since I drink coffee with creamer, this also cut back on calories.

I don’t have a scale right now because I get too hyper focused on weight loss. But, I can tell that there has been some positive changes in bloating and inflammation, because my clothes are fitting better.

There are more supposed health benefits to celery juice, which you are welcome to read here.

After two weeks of celery juicing, I definitely felt very positive about the experience and that I wanted to continue juicing.

However, we ran out of celery and found it rather expensive, since you need an entire stalk for a day’s juice.

Almost immediately, I noticed all of the negative symptoms celery juicing had improved coming back.

Celery juicing is definitely something that needs to happen regularly to maintain the benefits.

While I would like to do it consistently, the time and cost are a bit prohibitive.

I also like to switch it up a little by alternating plain celery juice with these 11 juicing recipes that are much tastier. *Update: I went back to celery juicing after taking a break and have been going strong for over a year. Read my new post on 5 gut health benefits of celery juicing!

All in all, it was a positive experience and I would definitely recommend it to someone with an autoimmune disease. I’m sure it’s good for any person to do, but I think the benefits might be better suited for someone who is experiencing any kind of heath issue.

If you want more deets on juicers, check out this post on how to drink yourself healthy with the 10 best juicers. And, this is the book by the Medical Medium that caused such a stir.

I have to say, I was pleasantly surprised by the results of my little celery juice experiment! I’ve gotten a bit used to trying new things, only to realize there’s a reason they’re just a fad.

Have you tried celery juicing? What was your experience?

Tell us in the comments below! 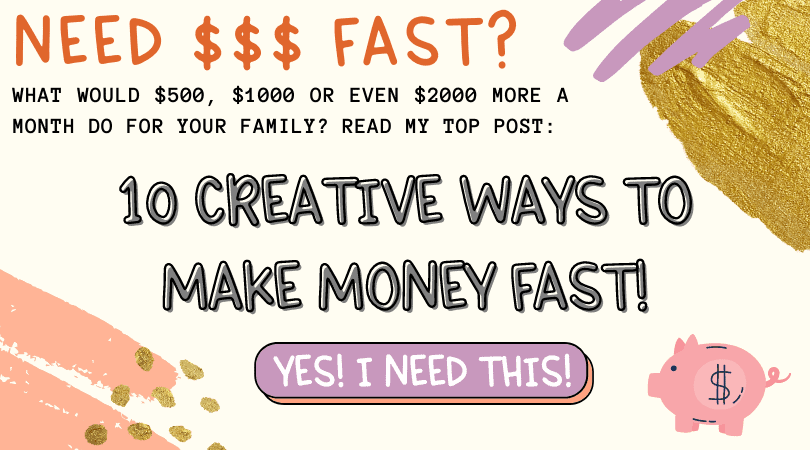