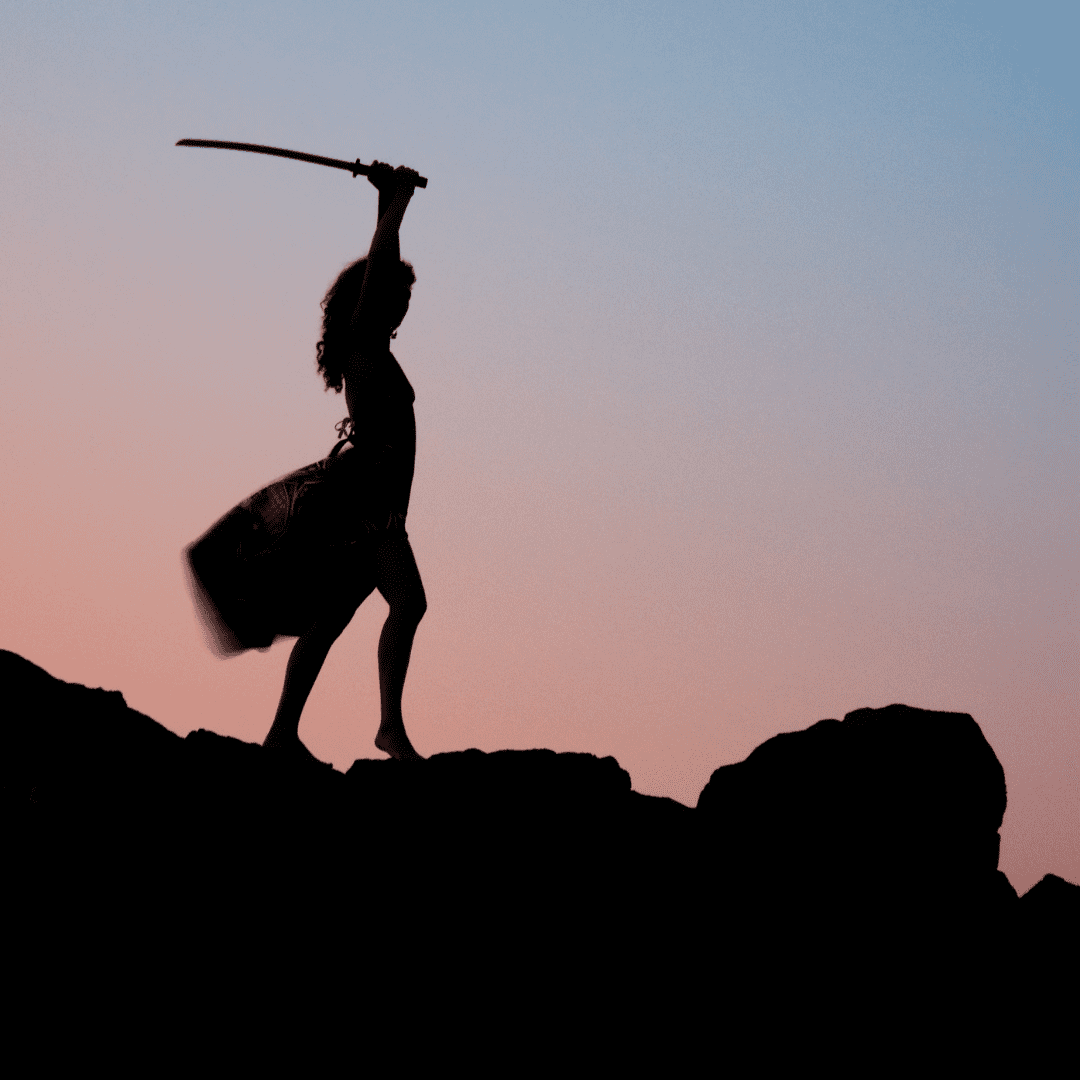 Not everyone wants a sweet, girly name for their new baby. You may be looking at your little warrior princess and want to give her a name that will remind her that she can do anything she sets her mind to. In that case, these powerful, warrior girl names could be exactly what you’re looking for.

The idea for this list was actually inspired by my friend who writes scripts. He reached out and said he’s working on a script with a character that is a tough, but captivating, female warrior. He wanted my advice for what he should name her–something powerful and fierce, but still beautiful. I looked through baby name posts I already had, such as regal girl names and greek goddess girl names, but nothing was quite right, so I started doing more research. Eventually, we found the perfect warrior name for his character and now I’m sharing all of the strong warrior girl names we found with you in this list.

While there are even more names with warrior meanings than this, I have paired the list down to the names that I think are the most contemporary, modern options. So, whether you’re naming a strong female character or picking a name for your little sidekick, these are the best warrior girl names for your fierce little girl. 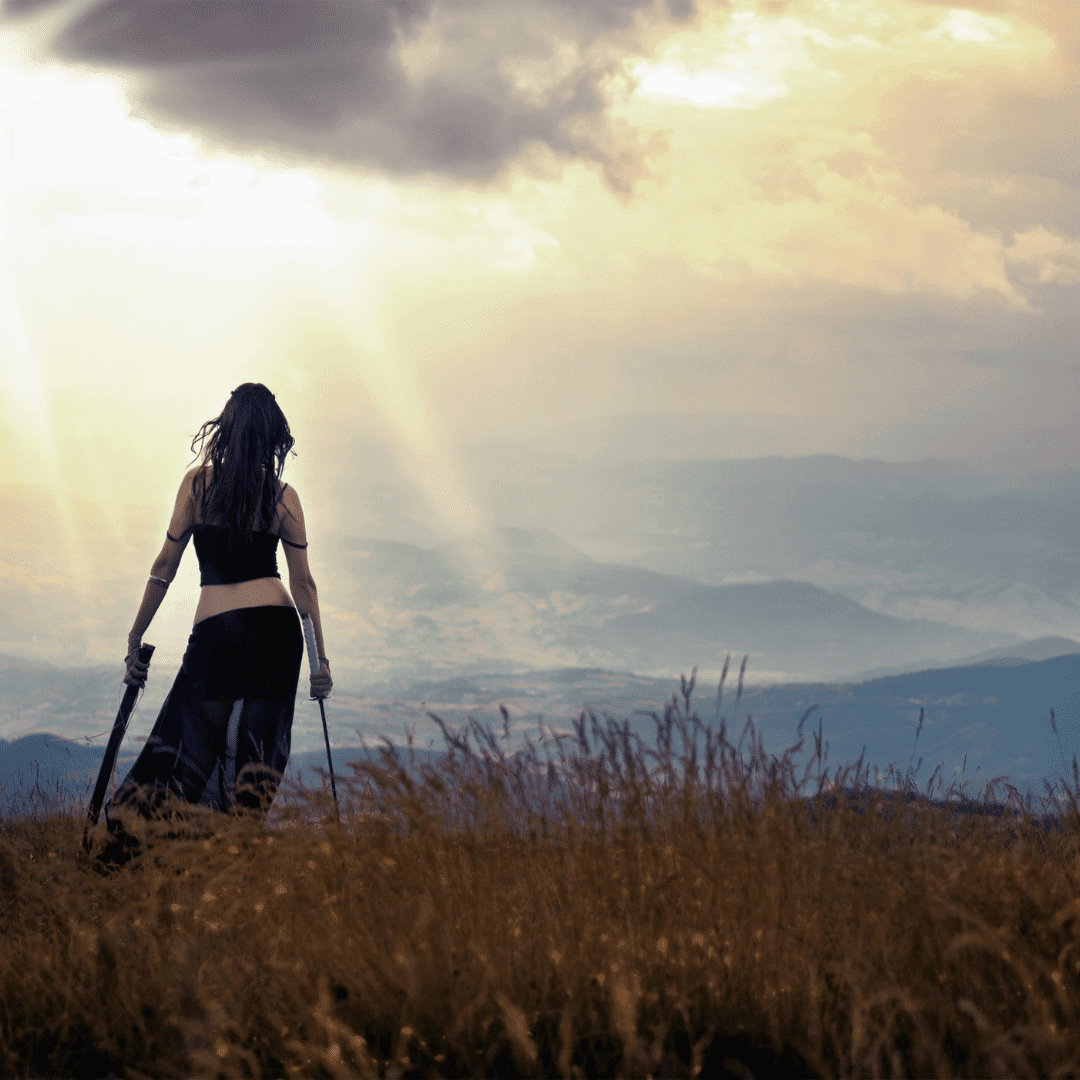 Greek. Means “war-like”. To me, this is a more sophisticated version of the name Lala, which has gained popularity since a famous reality TV actress uses this name.

German. Means “ready for battle”. I have a special affinity for names that use Z. There just isn’t enough of them, IMO.

Spanish. The Spanish version of the Greek name Alexandra. Alejandra is less common, easy to pronounce, and boasts the same powerful meaning “defender of mankind”.

Italian. The Italian version of Alexandra, with the same meaning “defender of mankind”. I love Alessandra. It was high on my list for a girl. I also like the shortened version, Alessia, which is supposedly Greek and has a similar meaning.

Greek. Shortened version of Alexandra. Powerful meaning, but a shorter, cuter name. Of course, with Google devices now being called Alexa, this one may lag in popularity.

Greek. A timeless, classic name that means “defender of mankind”. Alexandra is one of those names that almost everyone can spell and pronounce, and it’s also regal and beautiful.

Greek. Another variant of Alexander. I love that all of these version can have the nickname Alex. I love shortened, boyish nicknames for girls.

Speaking of Alex, this spelling is German and means “noble”. Very cool.

Italian. Unusual and beautiful. I love Italian names, they just roll off the tongue. This one means “elf warrior”. 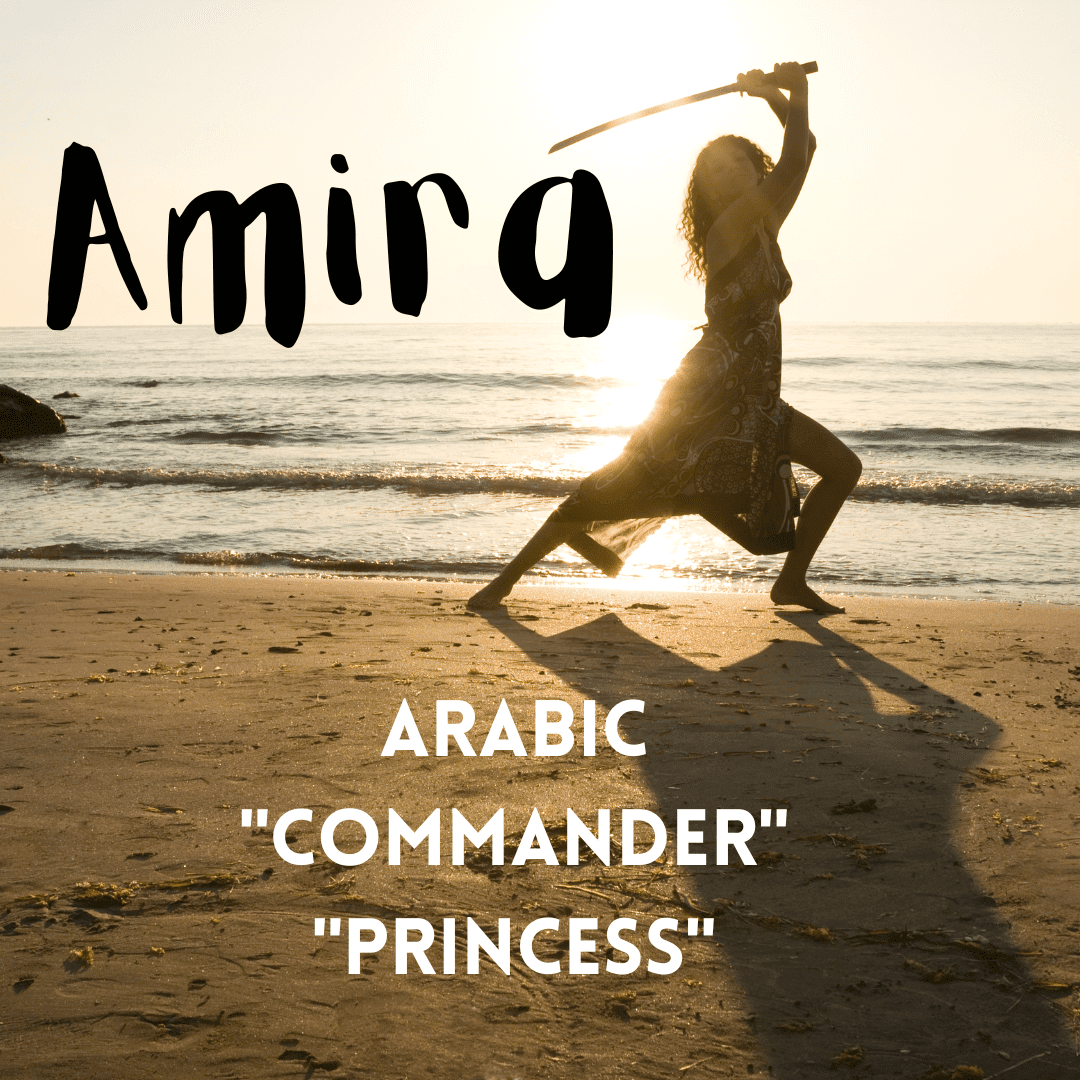 Arabic. One version says it means “commander” and another says “leader”. Both are powerful and fierce. Amira is a rare gem of a name and I wish we heard it more often.

Italian. Sure, it’s reminds many of us of the popular Italian fashion designer, but a girls name ending in “i” is very unusual and chic. It means “valiant warrior”.

German. Means “soldier”. Makes me think of a skilled fighter.

English. One of my favorite names ever. Audrey’s are always awesome, too. Means “noble” and “strength”. While not directly saying fighter or warrior, having nobility or strength would certainly make any Audrey a formidable opponent.

German. Assuming this is pronounced “Batilda”, but correct me if I’m wrong. It means “woman warrior”. If you’re a fan of names like Mathilda, this could really be a killer alternative that is less used with a badass meaning.

German. I really like names like Yvette and Odette, so Bernadette is adorable in my opinion. I knew a woman who picked this name for her daughter many years ago and at the time, I had never heard the name before. I asked her where she heard it and she said she loved the meaning, which is “strong and brave as a bear”. I can get behind that for sure.

Latin. Inspired by Roman mythology, Bellona was the goddess of war. It means “personification of battle”. Seriously, folks, this is an amazing name. 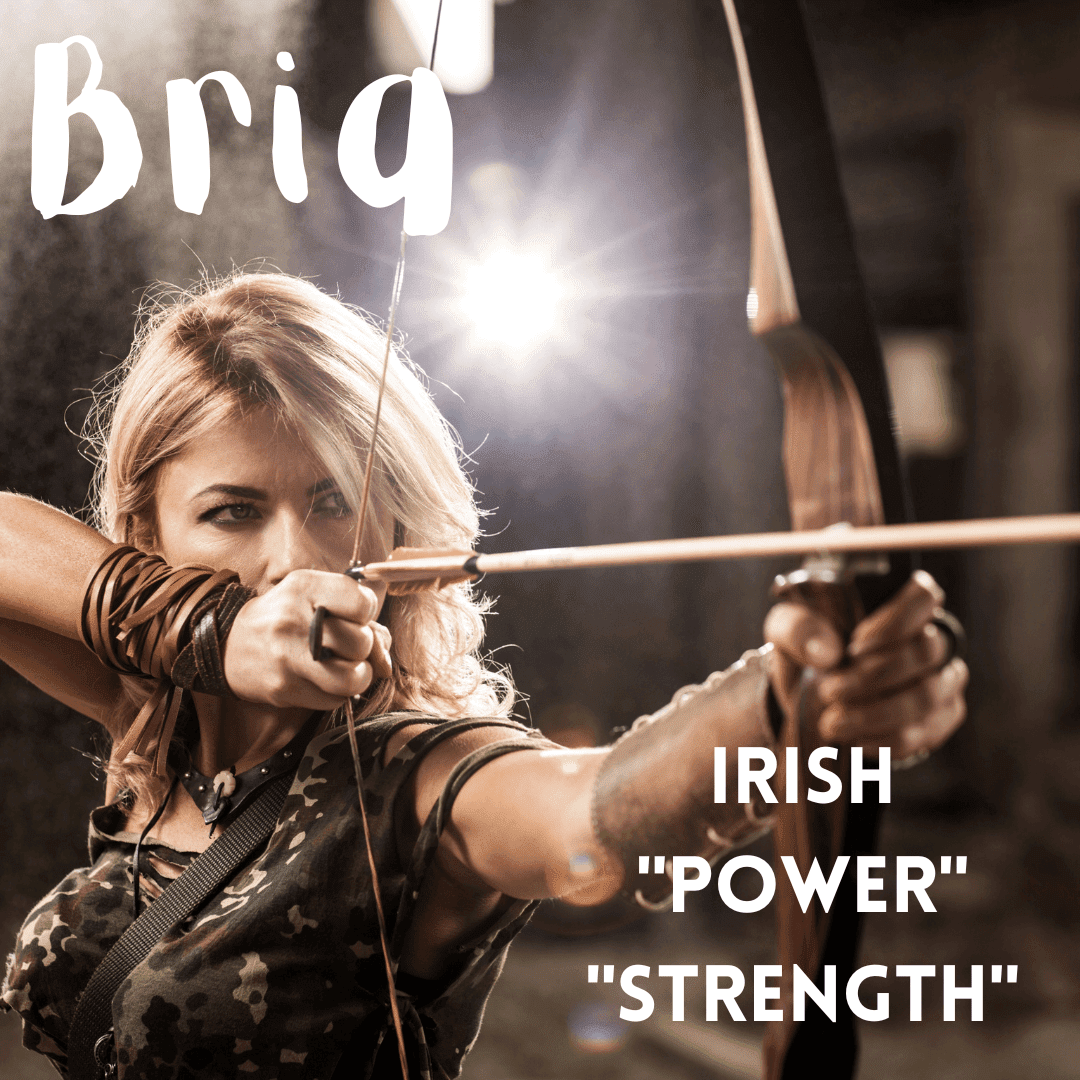 Irish. Obsessed with this name. Had I heard this before I named my daughter, this very likely would be her name. It means “power, strength and vigor”. Perfection.

Irish. Are you thinking of Bridget Jones’ Diary? Such a funny book and movie. It’s a great name, too and means “exalted one, power”.

English. One of my long-standing favorite girl names ever. Love, love, love Brielle. The meaning is fab, too, and will inspire your girl to be a “warrior of God”. Can also be used as a nickname for Gabrielle instead of Gaby.

Greek. Brizo was a Greek goddess who protected the sea people, such as sailors, mariners and fishermen. Women worshipped her by sending out offerings on little boats.

Irish. The Irish people have names with such strong meanings and Cahira is another one of them. Quite simply, Cahira means “warrior”. I love that it’s a more unusual play on names like Kira, Cara, and Kyra.

Italian. Derived from Roman mytholody, Camilla was a legendary warrior maiden. Her name literally means “helper to the priest”, but it is often defined as “warrior maiden” because of the mythological character. Either way, it’s a great name.

French. Shortened derivative of Camilla and is said to mean “fighter”. I love Cammi, but I love naming her Camilla and calling her Cammi even more.

Origin unknown, as it can be traced back to many different countries. Carla means “army” and “warrior” in most of those definitions, so I call that a win.

Greek. A gorgeous name that I adore. There are different meanings out there, from “one who shines and excels over man” to “warrior”. Its such a great name and Cassie is the perfect nickname.

Aramaic. An unusual, rare name that means “strong and mighty”.

Spanish. Reminds me of Clo and Chloe. Vea is also a cool nickname you could use. Clodovea means “famous warrior”.

One of the only D names that means warrior. Diana is another timeless name that seems to transcend generation. Originally known from Roman mythology as the goddess of the moon, hunting, and childbirth, Diana is a strong name for any girl.

Norse. Means “tough like the stone of Thor”. I knew a Dusty once and she really was just a very tough, strong person who went after what she wanted. Dusty is also the name of a celebrity baby, she’s the daughter of Adam Levine and Behati Prinsloo.

Persian. Love a good Persian name (my kids are half-Persian). Means “like a goddess”. Can’t beat that. For more Persian girl names, check out this post.

German. Another strong German name for girls, this one means “famous warrior”.

I have never heard this one, but I really like it. A combination of Emily and Lyn. Means “noble and brave warrior girl”.

German. Means “powerful ruler” and “ruler of all things”. I love that about my name. 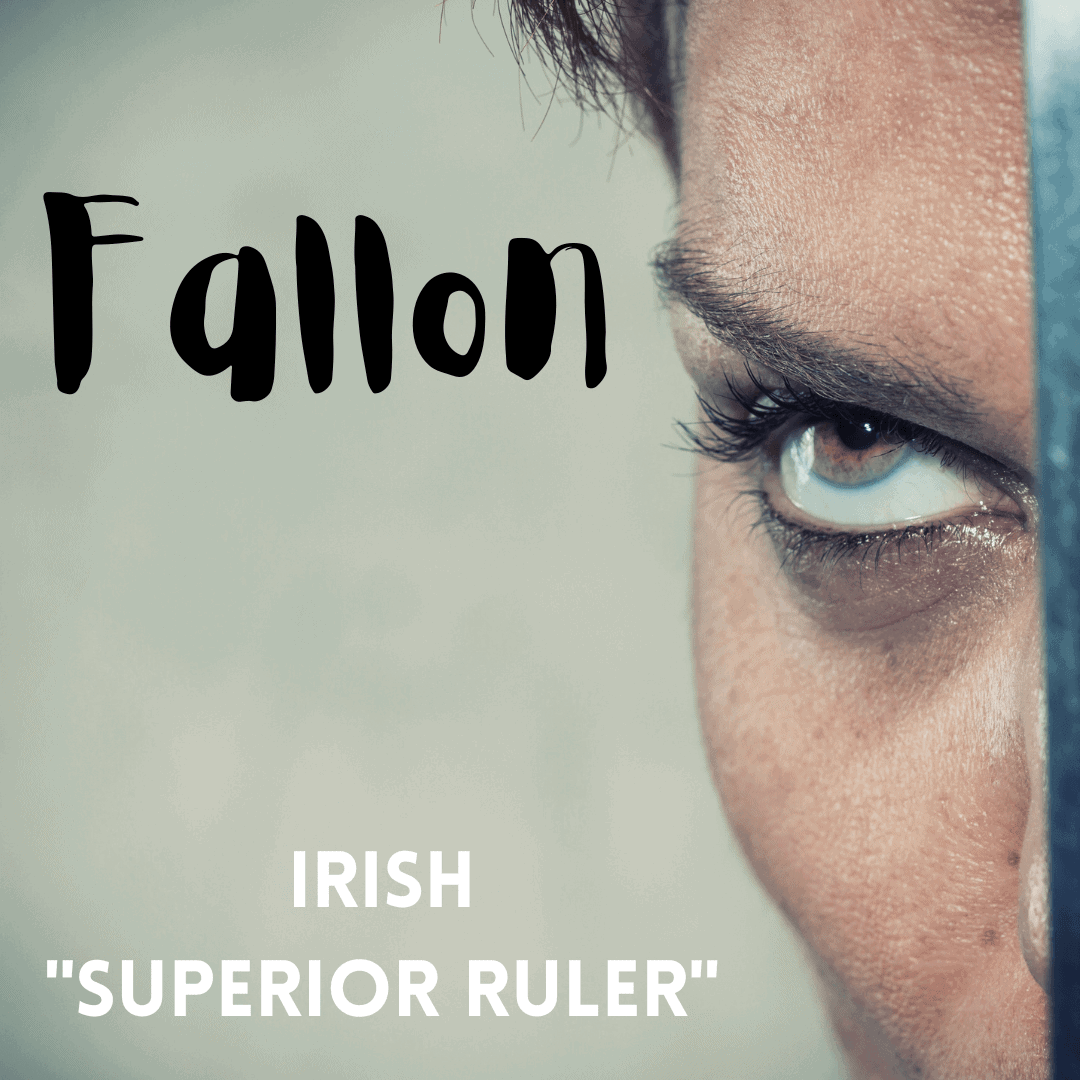 Irish. I had never heard this name until the show Dynasty was released on Netflix. The stunning star of the show is Fallon. Ever since then I’ve loved this name and finding out that it means “descended from a ruler” makes me love it even more.

Irish. Love this Irish take on the popular Italian name Gianna. I’ve never met a Fianna, but the nickname Fifi would be just too cute to resist. Means “band of warriors”.

Quickly climbing the baby name charts as a new baby favorite, Freya has old-world charm with the mystique of being rare and mostly unused (until recently). Freya means “noble woman”.

It’s a classic for a reason. This beautiful Italian name means “God is my strength”. Shorten it to Bria or Brielle for a modern take with a similarly powerful meaning.

I had no idea Gina means “queen”. Sometimes you aren’t looking for the most unusual name. A lot of people gravitate towards names that are easy for people to pronounce and spell. Gina would fit the bill, while also offering a really fierce meaning.

German. I had no idea so many German names had such strong meanings. Grisella means “dark battle”. Swap the s for a z, and Grizelda means the same thing.

Love Harlow. Such a cool, modern name. It means “army”, which makes me love it even more.

In Greek mythology, Hera is known as the queen of Gods. Means “warrior or hero”. I have never met a Hera, but now I am wondering why more people aren’t using this name.

English. Many possible meanings, including “countess” and “warrior”. All of them are strong and powerful.

You might recognize this name from the legendary princess in the story Tristan and Isolde. We considered Isolde as a middle name, because I just love it. Exact meaning is not known, but the German words it’s derived from mean “battle” and “ice”. Another meaning I found online said it means “to rule; fair maiden”.

Arabic. Means “strength”. I believe it is pronounced “jay-ana” which is very cute and not common at all.

Did you know that Jessica means “a warrior that can foresee”?

A great name that means “protected with helmet”.

Short name derived from Alexandria, Alexis, Alexa or Alexia. Has the same powerful meaning of “defender of man”.

Exact origin unknown, but the meaning is the same “famous battle”. Spelled “Luisa” in Spanish.

I know a little girl named Maeve and I just adore her and this name. She is so spirited and feisty and it fits her perfectly. The name comes from Irish mythology. Maeve was the warrior queen of Connacht. 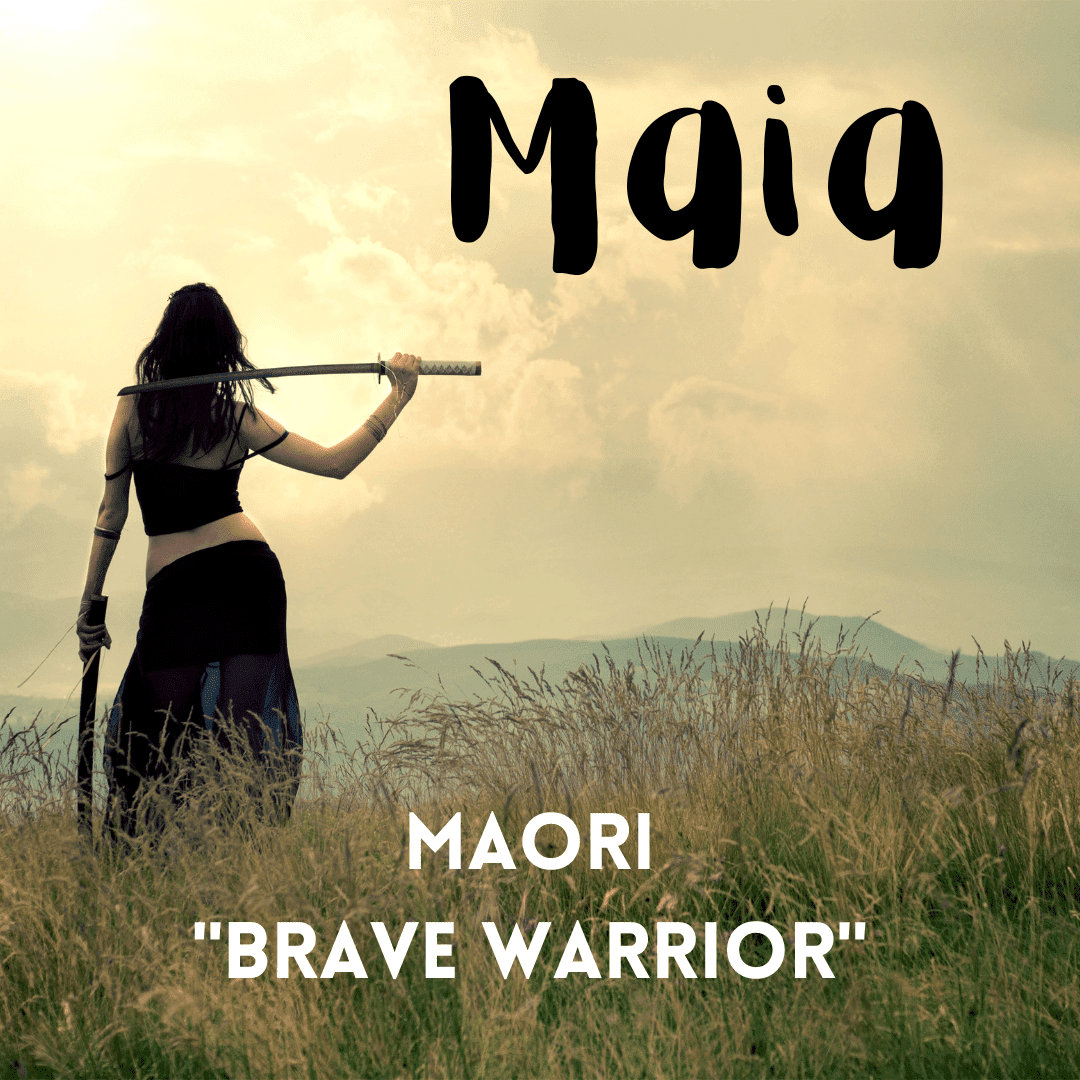 Maori. Obsessed with this spelling of Maya. The i is so chic. The meaning is as well. Maia means “brave warrior”.

French. Also spelled “Marcheline”. Means “warrior”. Personally I prefer it without the “h”, because I like the “s” sound instead of the “ch”.

One of my favorite Italian names for girls. I taught a boy named Marcella and always loved that, too. Marcella means “warlike”.

German. Also means “mighty in battle”. Could name her Matilda and call her Mattie. So cute.

Celtic. I had no idea Meredith had such a powerful meaning. Means “protector of the sea”.

Irish. Means “war goddess”. While its a cool name, I am afraid that most people would pronounce and spell it as Morgan.

French. Means “victory of the people”.

I know a Nikta and she’s awesome. Meaning would be similar to Nika, “victory” or “unconquered”.

Omisha was the goddess of birth and death. An incredible name to bestow on a little warrior.

German. Means “power of the wolf”.

Yes, like the song. Means “great queen”. Is there anything better than that? I say no.

Popular name, but did you know it means “defending warrior”?

Irish. Means “raid”. This is such a cool name and the classic film, “Ferris Bueller’s Day Off” really cemented it.

Scandinavian. Means “thunder” or the feminine form of Thor. 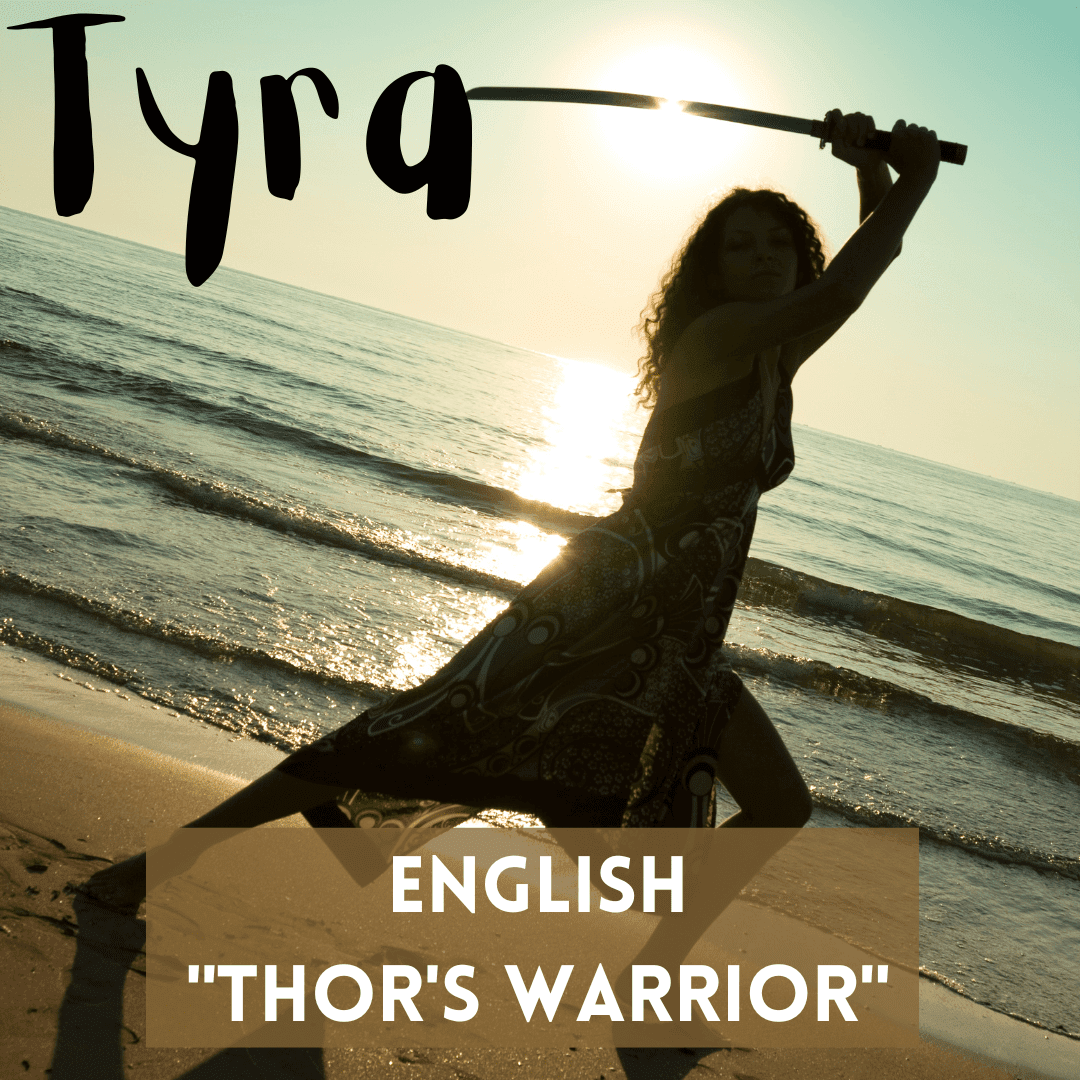 Means “princess”. I’ve seen different countries of origin, from Persian to Hebrew. One of my favorite names.

Did you know there were so many girl names with powerful meanings? There are so many great names on this list.

If you’re looking for more baby name ideas, there are tons of posts on the blog. Here are just a few of them you might like: